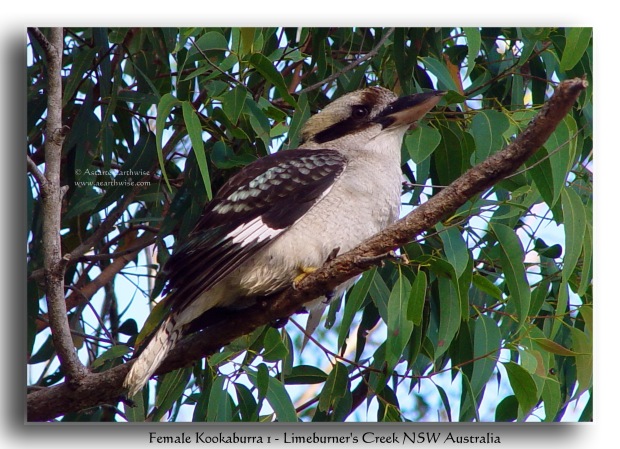 A Series of photos taken this morning here at the farm of a Female Laughing Kookaburra. I noticed that she appears to have quite yellowed feet. I feed a family of 7 Kookaburras here every day, I feed them grated mozzarella cheese and they love it, it’s also very good for their bones and feather production, as it helps build their calcium. I only feed them on sunset, and some days they dont come in, and so like this morning they are having the leftovers from yesterday.

The Laughing Kookaburra is instantly recognisable in both plumage and unique voice. It is generally off-white below, faintly barred with dark brown, and brown on the back and wings. The tail is more rufous, broadly barred with black. There is a conspicuous dark brown eye-stripe through the face. It is one of the larger members of the kingfisher family.

Usually the Male of this breed have  a more blue colour on the wings, whereas the female as in these shots shows a whitish light blue. 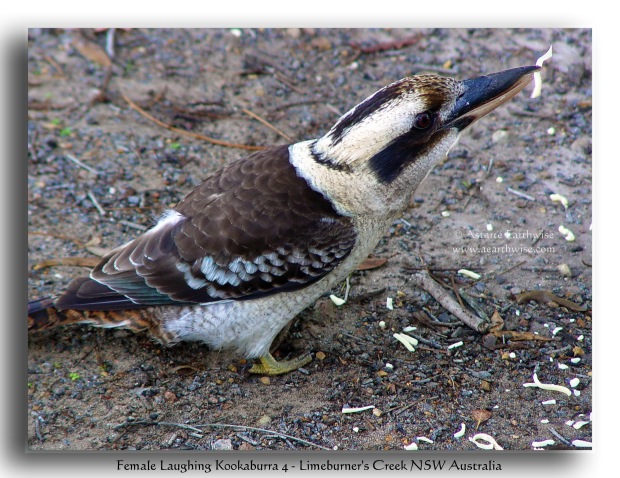 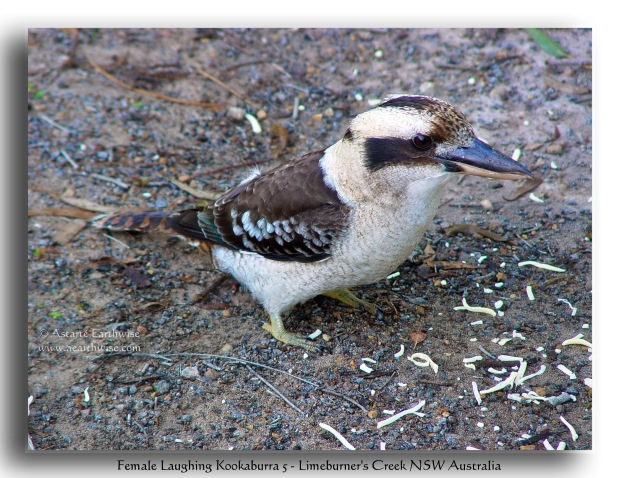 Laughing Kookaburras are found throughout eastern Australia. They have been introduced to Tasmania, the extreme south-west of Western Australia, and New Zealand. Replaced by the Blue-winged Kookaburra in central northern and north-western Australia, with some overlap in Queensland, although this species is more coastal.

Laughing Kookaburras feed mostly on insects, worms and crustaceans, although small snakes, mammals, frogs and birds may also be eaten. Prey is seized by pouncing from a suitable perch. Small prey is eaten whole, but larger prey is killed by bashing it against the ground or tree branch. They also do this with their cheese.

Laughing Kookaburras are believed to pair for life. The nest is a bare chamber in a naturally occurring tree hollow or in a burrow excavated in an arboreal (tree-dwelling) termite mound. Both sexes share the incubation duties and both care for the young. Other Laughing Kookaburras, usually offspring of the previous one to two years, act as ‘helpers’ during the breeding season. Every bird in the group shares all parenting duties.

Laughing Kookaburras often become quite tame around humans and will readily accept scraps of meat. This ‘pre-processed’ food is still beaten against a perch before swallowing.

From the first day I set foot on this farm I started my relationship with the Alpha Male that lives here, I called him Charlie, when he swooped to grab some of my sandwich I had thrown to a butcher bird. I think he was letting me know he was to be fed. If of an afternoon I forget he comes to the tree outside my office and calls to me as a reminder, once he flies in for his meal, in a hanging terracotta feeder, the rest fly in and eat from below him, we have definitely bonded, and I often pat him as he eats.